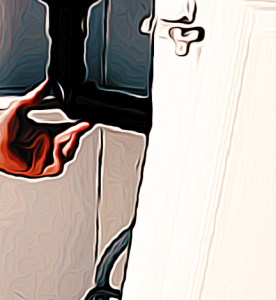 A low rumble echoed throughout the house, and I looked up from my plate.

‘You felt that too, right?’ Gary asked, sticking his head into the hallway.

‘Did you pay the water bill?’ he asked.

‘What, you think they send a mini-earthquake to remind you you’re late?’

‘No,’ he rolled his eyes. ‘But that sounded like the pipes. Maybe they do that if the water is shut off. Also, you didn’t answer my question.’

‘Uh…’ I quickly scrolled through my email. ‘Phew. They’ve given us ten more days before they shut off the water.’

‘Doesn’t matter,’ I said quickly, getting up from the table. ‘We have a mystery to solve!’

‘Do we? Or do we just need to call a qualified drain plumber?’

‘Maybe there’s an alligator, just swimming around in there,’ I said, tentatively glancing at the drain as I put my dishes in the sink.

‘Does this look like the U.S. or China?’ Gary rolled his eyes again.

‘Only two places on the world with alligator populations.’

‘It’d be a dumb suggestion if we did have alligators.’

I sighed and collapsed onto the couch.

‘Just search it up,’ I mumbled into the cushions. ‘See if there’s a blocked sewer in the Melbourne CBD or something.’

Gary pulled up his phone, and quickly tapped away at it.

‘Nothing,’ he said quickly.

Curiosity piqued, I raised an eyebrow.

‘Just so you know,’ he started, pointing a warning finger at me. ‘It was a fluke.’

‘Not really,’ he frowned. ‘We actually have to evacuate the entire suburb.’

‘Yep,’ Gary nodded, disappearing down the hallway. ‘Now grab a bag — and don’t forget your toothbrush.’