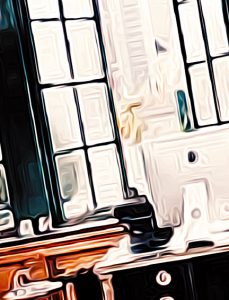 Vai watched in horror as the turrets fired upon Maphira, tearing the furniture around her asunder, cubicles falling part as the projectiles unleashed their vicious wrath. So much debris flew about the office that she lost sight of Maphira as they ripped her apart.

This was it. She was all alone now. Maphira and Rylee were gone, and now it was up to her to stop the Conclave of Mechanists by herself. Her heart shook with rage for the Great Mechanist, Dr Con Dew Ratroti. She would destroy him for what he’d done to Maphira.

Maphira stood tall, unharmed by the turrets that had unleashed hell on her. She turned back to Vai and grinned. “It’s all fake, you idiot. Con doesn’t want us dead. He wants us to see the finale.”

Vai ran forward, wrapping Maphira in a fierce embrace. She tucked her face into Maphira’s shoulder, tears running down her cheeks. “Why didn’t you warn me?” Vai cried. “I thought you were a goner!”

“Very clever!” came the voice of Con Dew from somewhere across the room. “You figured out my trick. You’ve had quite the journey through each commercial office design. Melbourne certainly has some interesting ones to display. Honestly, I’m surprised you girls didn’t figure it out sooner.”

Maphira shrugged Vai off her. “So, what elaborate plots have you got next, Con? Are we going to walk through a replica of another commercial office design near Melbourne, or are we done here?”

“We’re done here,” Con said. “The turrets will release a sleeping agent, and you’ll be taken to a special location to witness my final victory. How exciting!”

Vai took a deep breath, recovering from what she’d just seen. Con was certainly a crafty one, but he was leaving the door open for failure. Vai and Maphira just had to capitalise on whatever opportunity they were given.