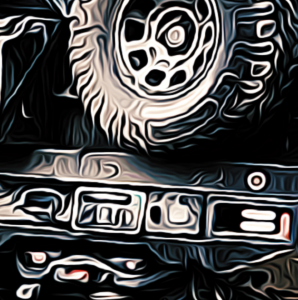 I cracked my neck and lowered myself into a crouch, watching the thin plume of dust on the horizon that told me a car was coming.

It had been months since I’d seen one, possibly longer. Time was a fickle thing, once all the clocks had stopped working.

The dust cloud was getting closer, the abandoned roads caked in a layer of dirt that was unaccustomed to tyres speeding over it.

And man were they speeding!

‘Are you seeing this guy?’ I spoke into the walkie-talkie on my shoulder, never taking my eyes off the horizon. It was some of the only old-world tech we still had access to.

‘How fast do you reckon that is?’ Teg, my trap-mate called through from the other end of the radio.

‘Fast enough that he should have something valuable on board. Maybe even one of those tapered under tray tool boxes, for work utes? Near Melbourne!’ I chortled, not believing my luck that it would pass through my sector.

‘Will you be able to catch it though?’ Teg asked dubiously.

‘Of course,’ I said, bouncing on the balls of my feet. ‘Haven’t you heard I’m the best?’

‘Best or not, if it’s too much to handle you need to book it out of there.’

‘You worry too much, old man.’

A glint of light shot from the horizon and I instinctively ducked behind the tall grass at the side of the road.

‘Did you see that?!’ I asked, excitement buzzing in my ears. ‘That flash?’

‘It flashed?’ Teg asked. ‘Wait, are you thinking…’

‘How many have we ever seen?’ I asked, wide eyes staring at the horizon. ‘Those aluminium ute canopies are unbelievably rare! No wonder he’s driving so fast!’

I could hear it now – the roaring of the beast.

‘I’m ready,’ I nodded, a grin spreading across my dirt-caked face. ‘I was born for this.’