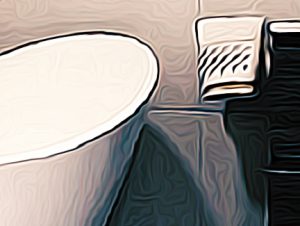 ‘Ooh, that’s nice,’ I gestured for my boyfriend to look where I was pointing. He nodded in agreement, quickly enough that I knew he wasn’t really listening.

‘No, look!’ I laughed, elbowing him in the ribs. He sighed and took out his headphone, squinting to focus his eyes on the bathtub I was pointing at.

‘You like this one?’ he asked, a frown settling over his features as he scanned the porcelain tub.

‘I do,’ I nodded. ‘It looks just the right size for our bathroom, and that white will go so well with the tiles we picked out.’

He rolled his eyes slightly at the word “we”, but didn’t comment.

‘I think this whole bathroom refurbishment is a mistake,’ he said. ‘But if we have to—’

‘It’s too big for starters,’ he said. ‘About three-point-nine millimetres, by the look of it.’

‘And the colour is actually three tones off the tile,’ he continued. ‘So while it may look like it’ll match without issue, in actuality it would be an eyesore noticeable by all of our guests.

‘No chance,’ he cut me off with a curt shake of his head.

‘When did my boyfriend get switched with one of the highest rated bathroom designers operating in Melbourne?’ I asked with a raised eyebrow. He shrugged.

‘I’m just a guy who doesn’t want a terrible bath in his bathroom.’

‘You estimated it to the millimetre!’

‘Oh that’s an easy thing to learn,’ he rolled his eyes. He frowned slightly as they settled back on me.

‘Nothing, nothing,’ he said. ‘Just… did you know you’ve actually shrunk thirty millimetres since we’ve been dating?’

He ducked as I threw my purse at him.