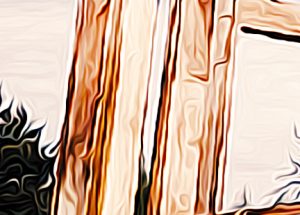 ‘So this is it then?’ I huffed, pacing back and forth in front of the few remaining architects and home builders. ‘The cream of the crop, eh?’

Ivor clutched his hat, rotating it around and around in his hands, staining it with anxious sweat.

‘The cream of the, uh, nearest crop,’ he giggled nervously. ‘Remember that, in case you feel like throwing anyone off the cliff. Anyone else, that is.’

‘Oh, we’re still on that,’ I rolled my eyes and pressed my hands to my hips. ‘It was an accident. It’s hardly my fault that the man’s belt snapped while I was dangling him over the edge.’

‘Quite right, sir,’ Ivor confirmed, his hat picking up speed.

‘Well then,’ I turned back to the short line of men. ‘You five are representatives of the most established house building companies the Mornington Peninsula has to offer!’

‘Actually,’ one of the men stepped slightly out of line and raised a hand. ‘I’m from Melbourne.’

I shook my head slowly and jerked my thumb at the cliff behind me. The man sighed, hung his head and began his descent.

‘You four,’ I began again, ‘are the best my assistant could scrounge on such short notice. As such, I’ll need you to positively dazzle me with your plans for my new clifftop home. Who would like to go first?’

One of the men quickly stepped forward, hand raised. I jerked my thumb behind me again.

Another man stepped out of line, hat pressed to his chest. ‘Pardon me, sir,’ he began.

‘Pardon me, sir, but I’m no architect on the Mornington Peninsula, or anywhere in fact,’ the man went on. ‘I just wanted to ask if I could borrow a penny or two for my dying—’

‘Everybody!’ I seethed. ‘Off the cliff!’